My tuition has been deeply impacted by the Covid-19 crisis. See the current situation here:

COVID-19 (Coronavirus) has created uncertainty and upheaval for us all in our daily lives, and in many cases forced us to change the way we can do business.

I am very much back to work, with restrictions mostly lifted!

I am running private tuition sessions, and have booked workshops in for the first half of 2022. Most of these are booked direct with me, and I also have some dates for workshops with the RHS at Hyde Hall too. To have the best chance of booking on to these, do make sure you're signed up to my newsletter.

I am sending out Gift Vouchers as normal, these having a 2 year validity, and extensions if required due to any lockdowns. Click to purchase Gift Vouchers.

My decisions regarding tuition are being constantly reviewed in light of further advice as time goes on. I will update here, on the relevant workshop pages on my website, by newsletter, and via social media (Facebook, Instagram, Twitter), as and when required.

I continue to provide private tuition via Zoom and Skype. I also occasionally run online free Q&A sessions, make sure you're signed up to my newsletter to receive details of these.

If you wish to meet for a practical private photography session, please get in touch.

Gift Vouchers with an expiry date between 01/03/2020 and 30/09/2022 will automatically receive a 1 year extension to that expiry date due to the Covid-19 lockdown period. This extension will be reviewed in light of further COVID-19 restrictions and regulations.

Essex Wildlife Trust's visitor centres are open, but my workshops with them are still disrupted. You can read their statement on the EWT website. Many apologies for the disruption.

The RHS are running events and workshops at Hyde Hall, and I have some dates booked in for 2022. Please head to the Art of Garden Photography and Know The Basics workshop pages to book these when available. You can read their current Covid statement on the RHS website. Again, many apologies for the disruption.

I am running workshops booked direct with me, have a look at the workshops pages, but do also make sure you're signed up to my newsletter, some workshops are only advertised through this.

It's been very rewarding to still be able to present talks to camera clubs via Zoom throughout the pandemic, and I have lots more booked in for the coming months, as well as some face to face ones. Do get in touch if your club would like one too.

I thank you for your patience and understanding during these prolonged times.

Advice: How To Shoot The Moon

There are some questions that come up time and again, and one of them is "how do you photograph the moon?"

The result many people get when they first try is something like this: 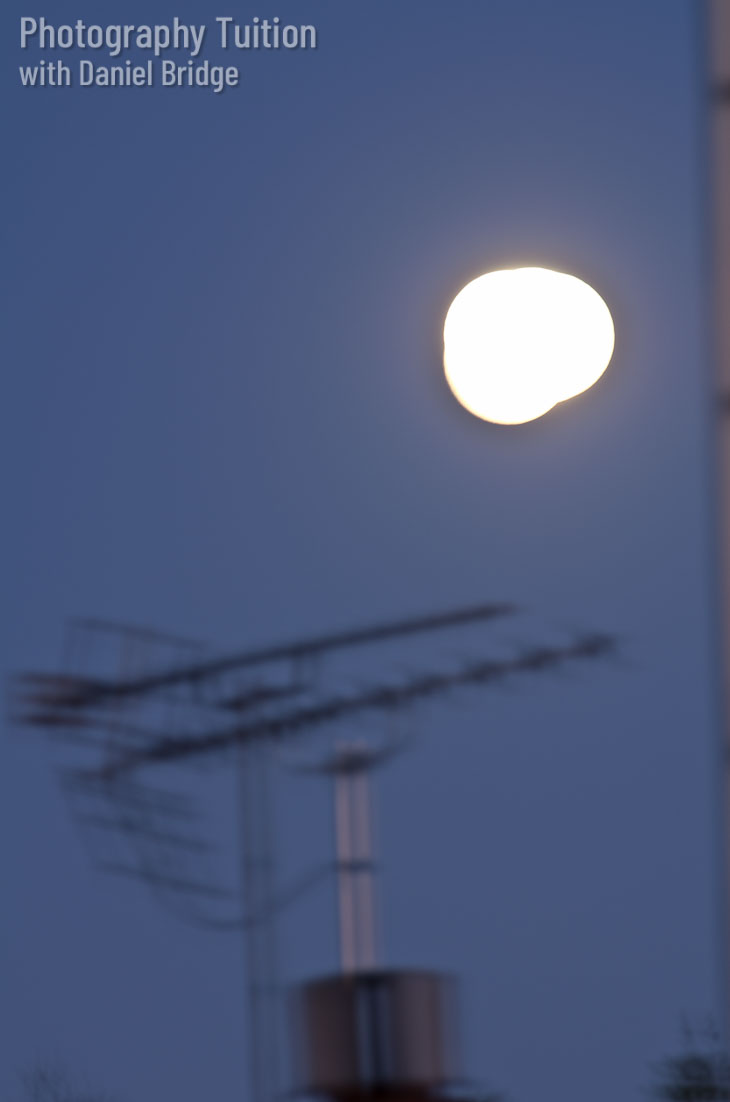 Now the problem here is that cameras have to make assumptions about what they're being pointed at. One assumption they make is that over all, the brightness of the image will add up to an average 'mid-tone', so the dark sky and relatively small moon mean that the exposure becomes much brighter than we want it. In the above example the camera chose an exposure time of 4 seconds, which resulted in lots of camera shake, and a grossly overexposed moon.

This is one of the times when manual exposure is a good mode to use. The surprising thing about photographing the moon is the short exposure time required, but when you think about it, it does make sense. Rather than being dark, like our surroundings at the time, the moon is being lit by full sunlight, so the exposure we need to give it is pretty much the same as we'd use (or the camera would pick) for a daylit landscape shot.

We rarely have to use this rule anymore, but there was a time before lightmeters were built into cameras, and being able to estimate the exposure was very useful. But it's still useful as a starting point for getting a good exposure with the moon, although a slightly wider aperture generally gives you better results, as the moon is actually quite a dark object, but the Earth's atmosphere will also reduce the brightness when the moon is lower in the sky too.

So switching to 'M' (Manual) mode on the camera, set an aperture of f/8, set your ISO to 200, and pick a shutter speed around 1/200s, and see if that doesn't give you a pretty good exposure on the moon. For a more hand-holdable shutter speed, drop your aperture to f/5.6, and you can raise the shutter speed to around 1/400s. If it's too dark, drop your shutter speed a bit, or pop the ISO up to 400, or both. Have a play. 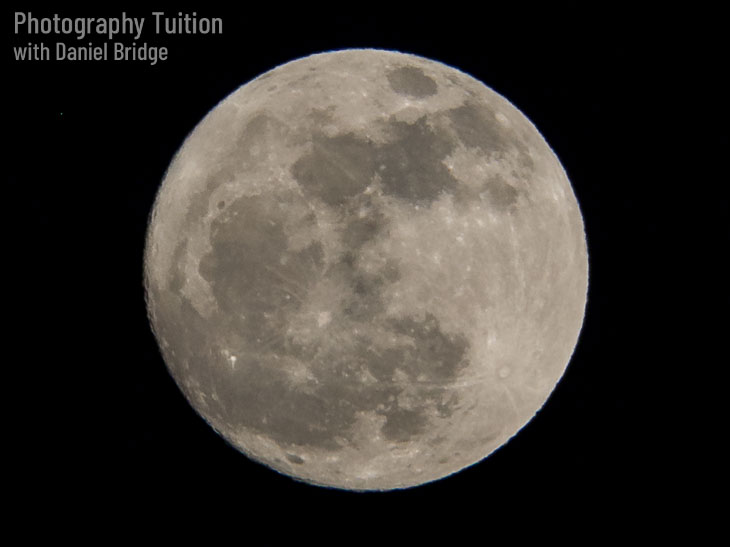 The above was shot on a full moon, and was then heavily cropped to get the above composition from the relatively short focal length of 300mm. Try shooting the moon when it's not full too; you may need a slightly longer shutter speed, or a higher ISO, but the sidelighting on the moon will help highlight the craters and texture. 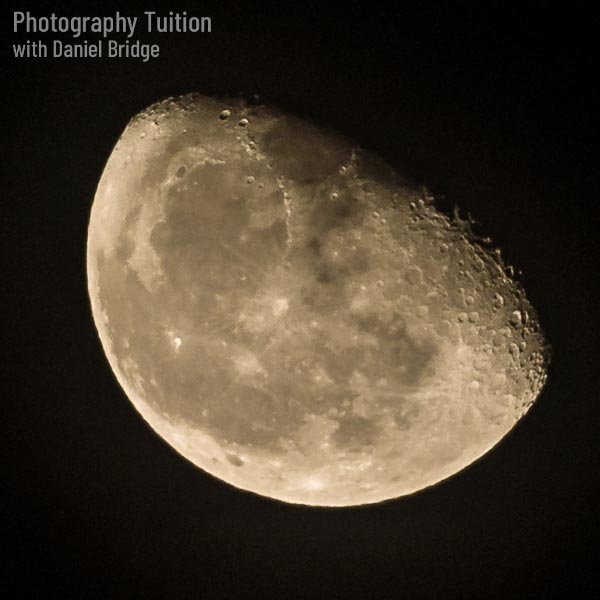 You can find the date of the next full moon here, take a look, have a practice, and hope for a clear sky!

What Camera Should I Buy?

How To Shoot The Moon

Do you have a question? Please ask!

Send us your questions and we'll get back to you as soon as possible.

Daniel produces a monthly newsletter so you can be notified of new workshops first with priority booking, get special offers on tuition, top tips, and a bit of general news thrown in too.

Daniel Bridge Photography will use the information you provide on this form to be in touch with you and to provide updates and marketing. Please click 'Subscribe' below to confirm you wish to regularly hear from us by email.

You can change your mind at any time by clicking the unsubscribe link in the footer of any email newsletter you receive from us, or by contacting us at newsletter@danielbridge.co.uk. We will treat your information with respect.

We use MailChimp as our marketing platform. By clicking below to subscribe, you acknowledge that your information will be transferred to MailChimp for processing. Learn more about MailChimp's privacy practices.

I have attended two courses with Daniel
"I have attended two courses with Daniel, looking at coastal and macro photography. Both sessions were very well organised with a class session followed by outdoor practical work. Daniel is very patient and takes time with everybody to ensure that each person understands how to achieve good photographic images for the relevant topic. The courses are priced reasonably and more importantly are very enjoyable." Marguerite via Trustpilot

Another great day spent with Daniel
"Another great day spent with Daniel learning the basics and how to control my camera. A very informative day presented in an easy to understand format. Have read about aperture, shutter speed and ISO but never really understood it. This workshop gave me a much better practical understanding of how these work together. Have been out practicing today doing everything in manual mode and really enjoyed experimenting. I will get a lot more pleasure from my photography now that I know more about what I am doing. Would highly recommend this workshop." Steve via Trustpilot

Fantastic 1 to 1 private tuition with Daniel
"Fantastic 1 to 1 private tuition with Daniel. After a year of ‘playing’ about with my camera I needed to be taught some of the basics, Daniel made this simple to follow and demonstrated as he went along. I feel like I’ve picked up some handy tips and will definitely put what I have learnt into practice as soon as this rain goes away!" Cassie via Trustpilot

London Walk
"A very enjoyable experience, walking from Blackfriars to Westminister Bridge. Although I have walked along this route at other times, Daniel gave you an insight into seeing things with a photgrapher eye. He provided helpful advice about the settings to use, giving you a chance to try different ways of capturing an image. He also responded to any queries of how to shoot particular scene." Susan via Trustpilot

Great Session Top Tuition
"My husband and I attended the Know The Basics workshop. It was a very enjoyable and informative day. The session was interactive and set at a good pace. Daniel’s friendly presentation was very effective with an excellent supporting booklet. We now have the confidence to use our cameras competently and enjoy our photography even more. Totally recommend Daniel to help you wherever you are on your photography path." Julie Rose via Trustpilot

©Copyright Daniel Bridge Photography Tuition 2003-2022
Please read the privacy policy carefully as it details our practices regarding collection, use, disclosure, retention, and protection of your personal information.
Lost? Here's a Sitemap